A DAY OF ARCHITECTURE, DESIGN AND ART WITH… THE SOLO GALLERY 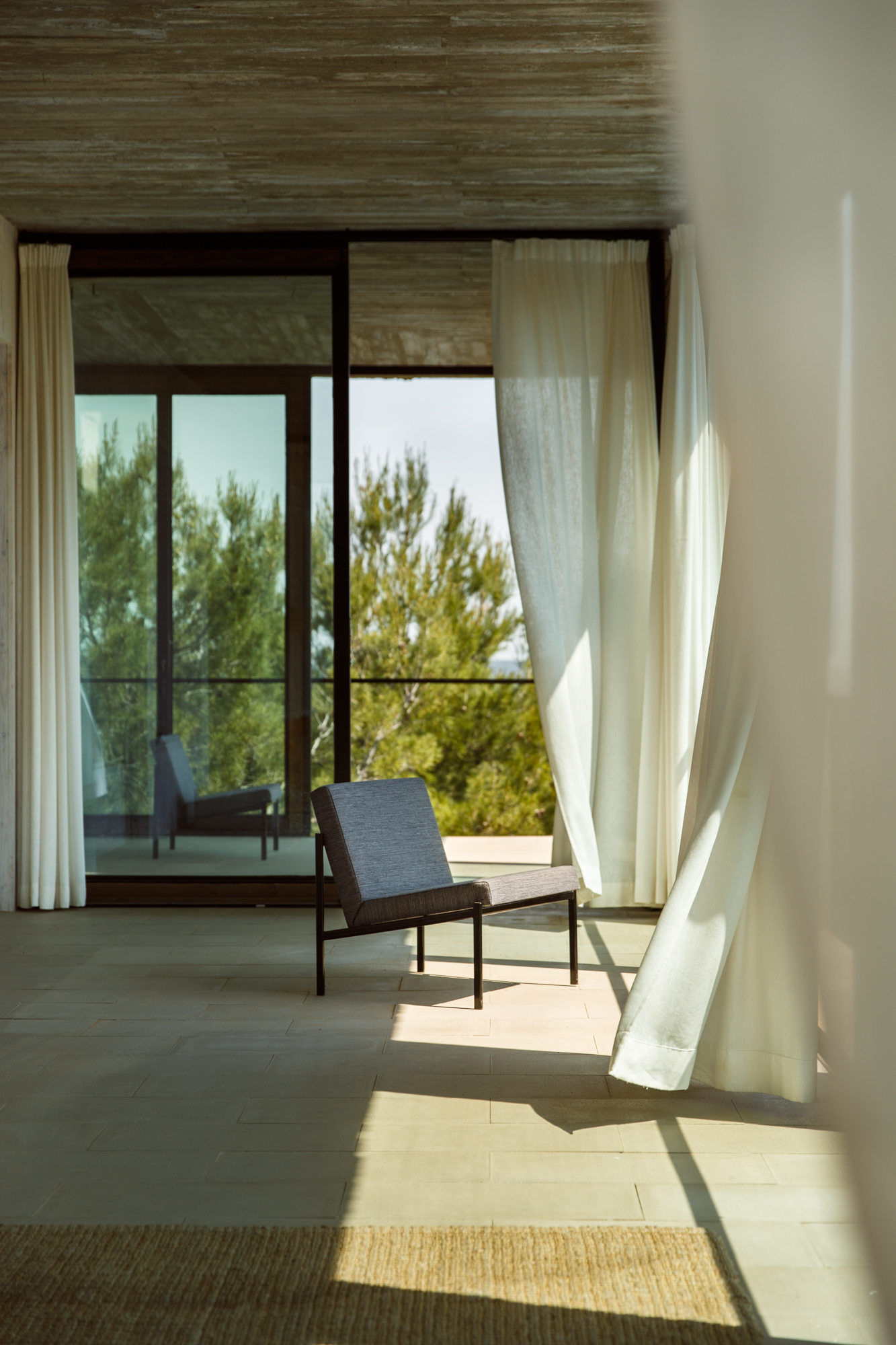 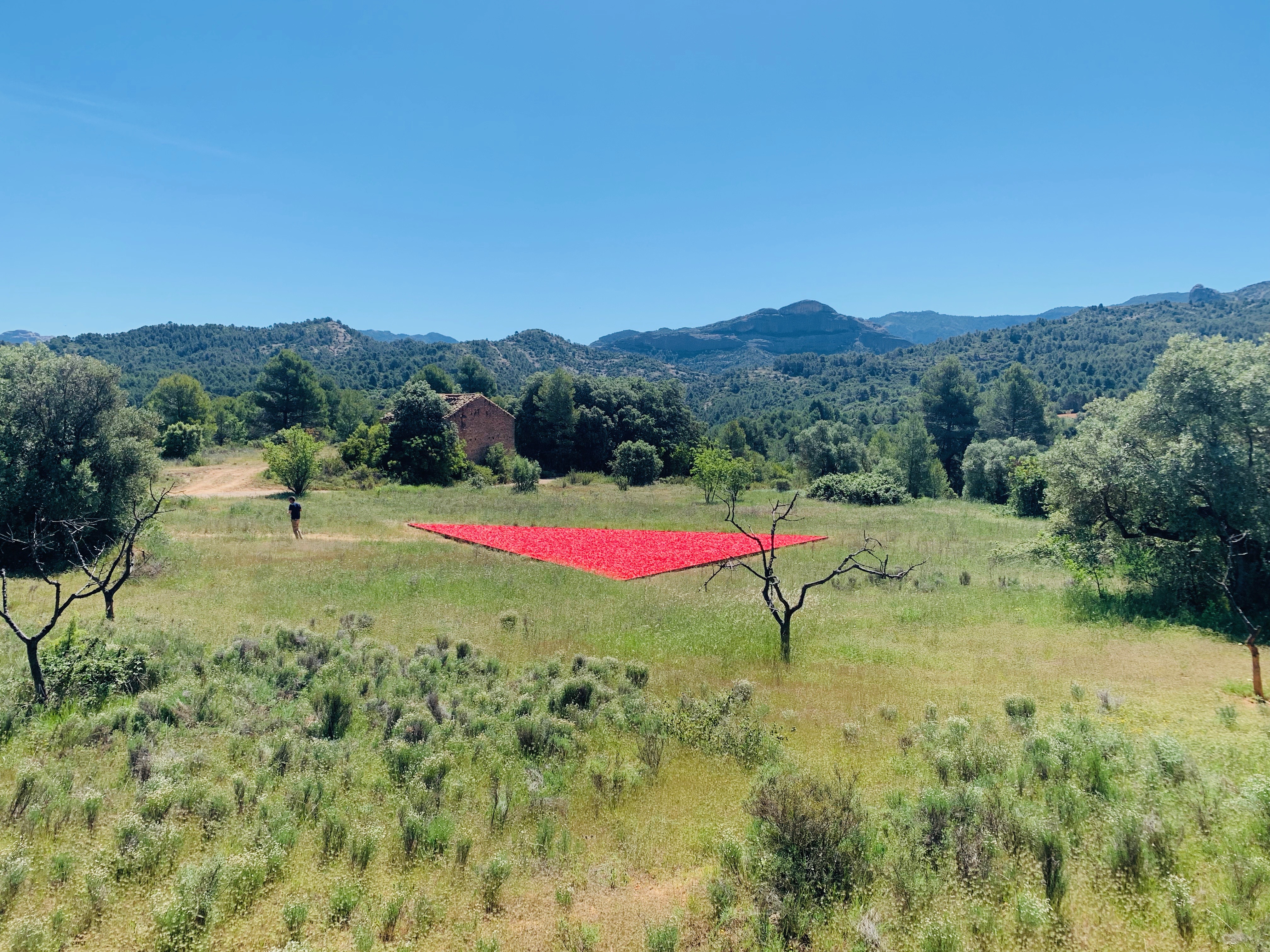 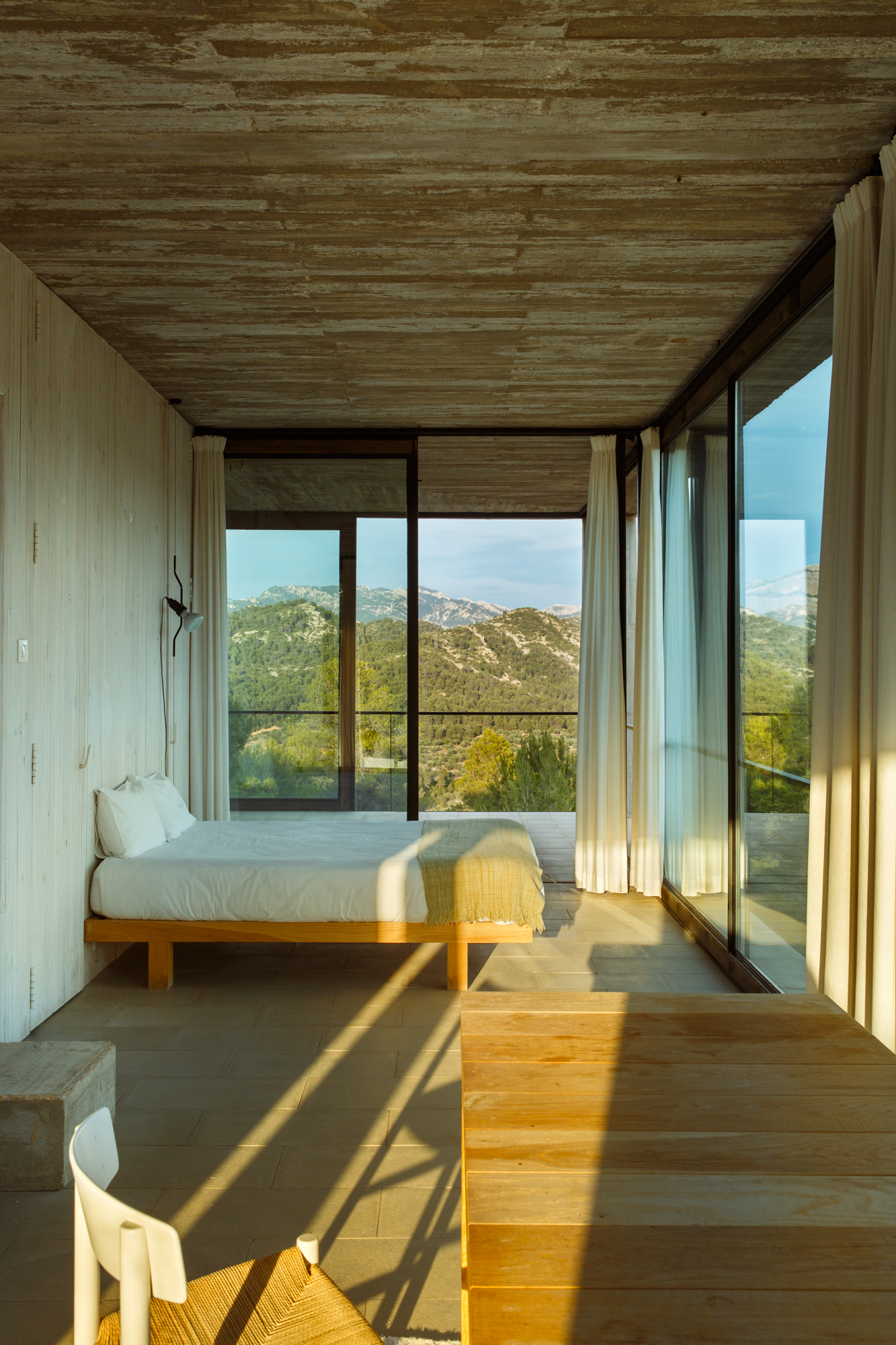 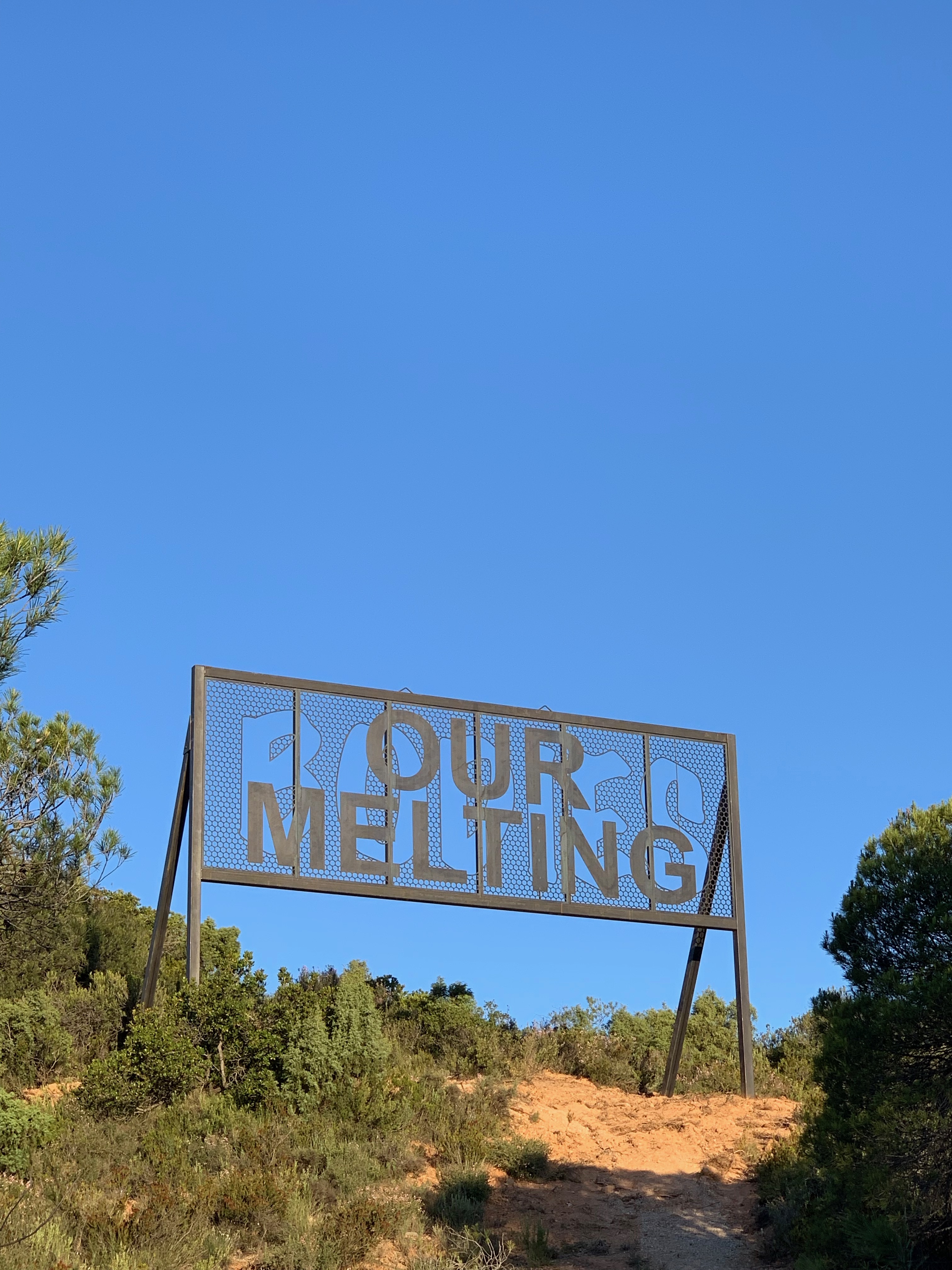 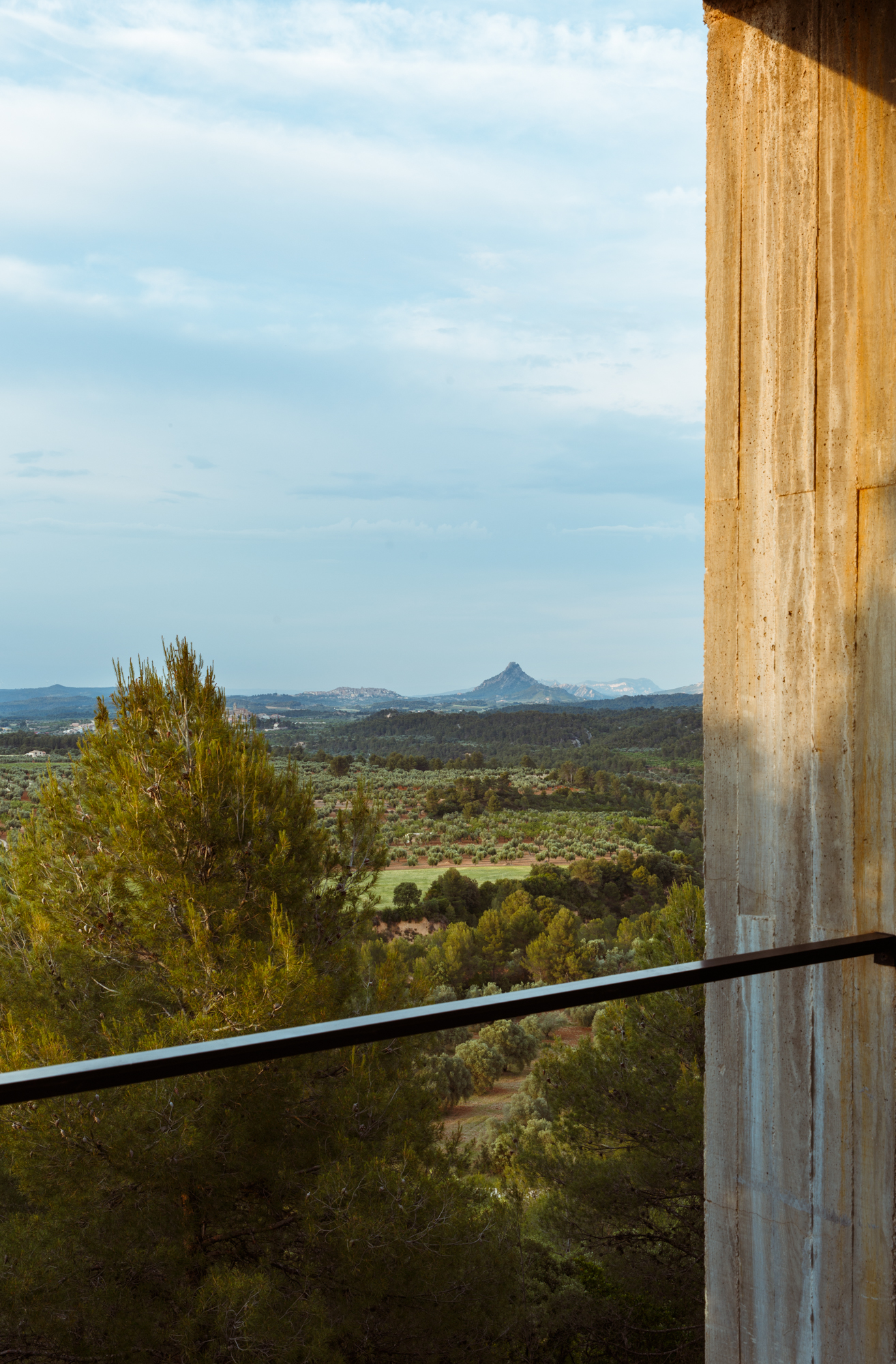 The architectural project Solo Houses hosts the Summer Group Show, the first edition of a unique annual show that its promoters start, the gallery owners Eva Albarrán and Christian Bourdais, founders of the Solo Gallery and creators of the Solo Houses project. Located in the natural environment of Matarraña (Bajo Aragón), national and international artists present projects that challenge the perception of space in dialogue with nature and the environment.

This first exhibition, which was inaugurated on May the 24th and is it will extend for six months, bringing together a total of nine projects of artists with whom Solo works, together with others proposed by the gallery owners Juana de Aizpuru and Emilio Álvarez, director of Àngels Barcelona.

The exhibited works constitute temporary installations, some of previous existence and others created for the occasion, which are scattered around the Solo Houses enclosure: outdoors and surrounded by nature. This project poses, without a doubt, a notion of an art gallery as a meeting and experimentation space, beyond its conception as a closed exhibition space. In a kind of reinvention of the Country of the Tender, during this trip the stops of the route are marked by the nine works of art that make up the exhibition, two of which have been created specifically for this occasion and others have been reconstructed for the environment of Matarraña.

An attractive cultural attraction that will make even more special a few days of vacation in Solo Houses this summer.

With the aim of confronting art with architecture and landscape, and facilitating new experiences and formats for architects in synergy with the natural environment, Bourdais and Albarrán launched Solo Houses, the first architecture collection in Europe.

Edge of the Natural Park of Ports, consists of fifteen houses (two built and thirteen in project), immersed in full nature, surrounded only by themselves. The unique design of each house is the result of the invitation of gallerists to twelve of the most innovative architecture studios in the world, which were given carte blanche to conceive them. The open field between these houses now becomes an exhibition space that brings art, architecture and surrounding nature into conversation.

With this perspective, the first collective exhibition Summer Group Show by Albarrán y Bourdais promotes the integration of the architectural experience with the artistic one, completing the singular cycle of Solo Houses: architecture, nature and art.

The work consists of a field of small stones painted in a single fluorescent color that comprise a flat geometric shape, confined by a rusted steel frame. Rondinone is based on the principles of Land Art in which the work was aesthetically linked to the landscape and the nature that surrounds it, using natural materials, but making them artificial thanks to the brutal contrast introduced by the color in this work. 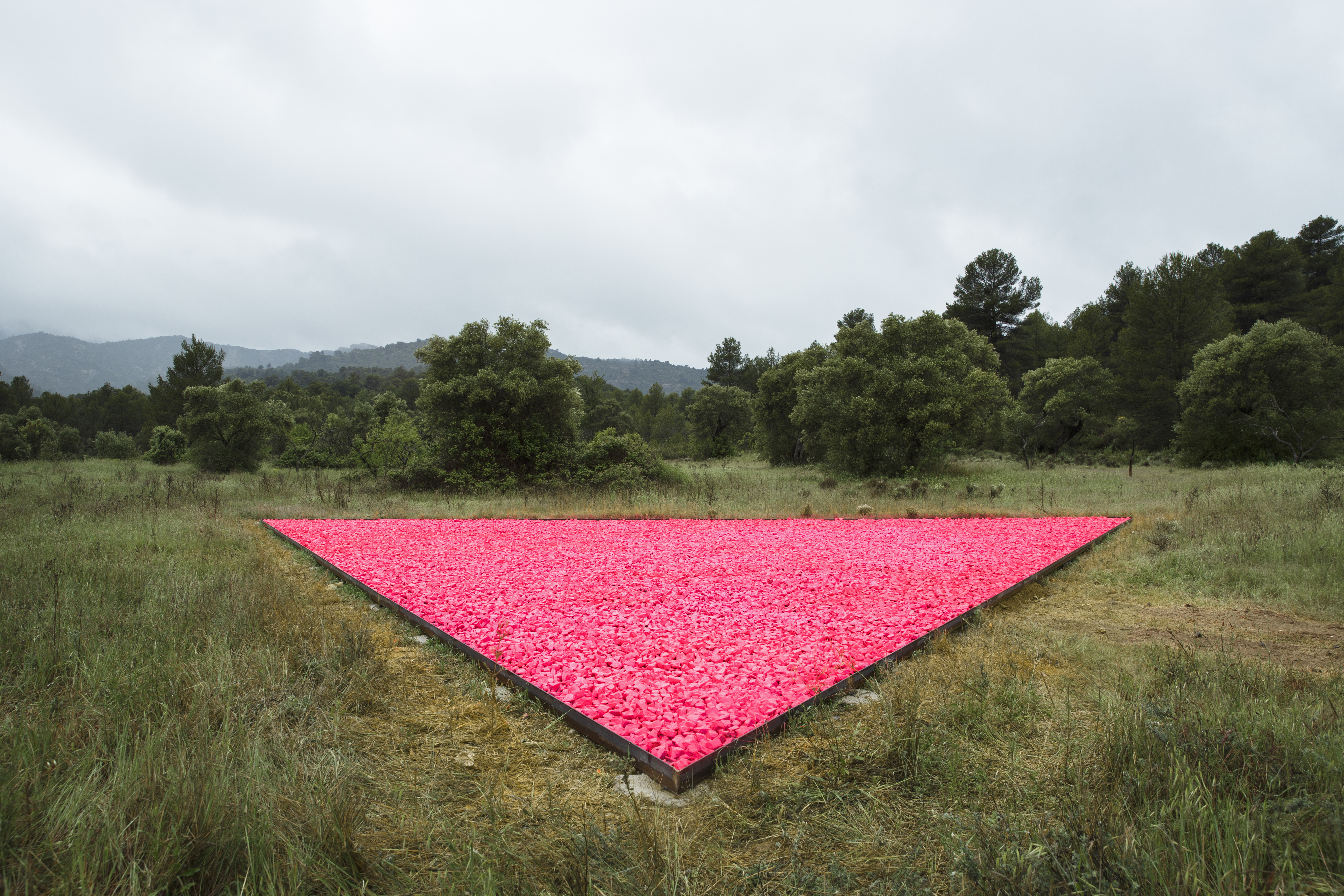 For Mosset, a great work is one in which the viewer sees «nothing beyond what there is». With Cimaise the artist presents the work in five different ways, in which the five concrete blocks vary their position: in a circle, in a row, in parallel, in the shape of a panopticon, shaped like a pentagon and superimposed. Each of these presentations is the same work, giving emphasis to the material and the shape of each one of the blocks. They follow each other, manipulated to neutrality and transformed into monumental sculptures tha seem to wait for the absent painting. 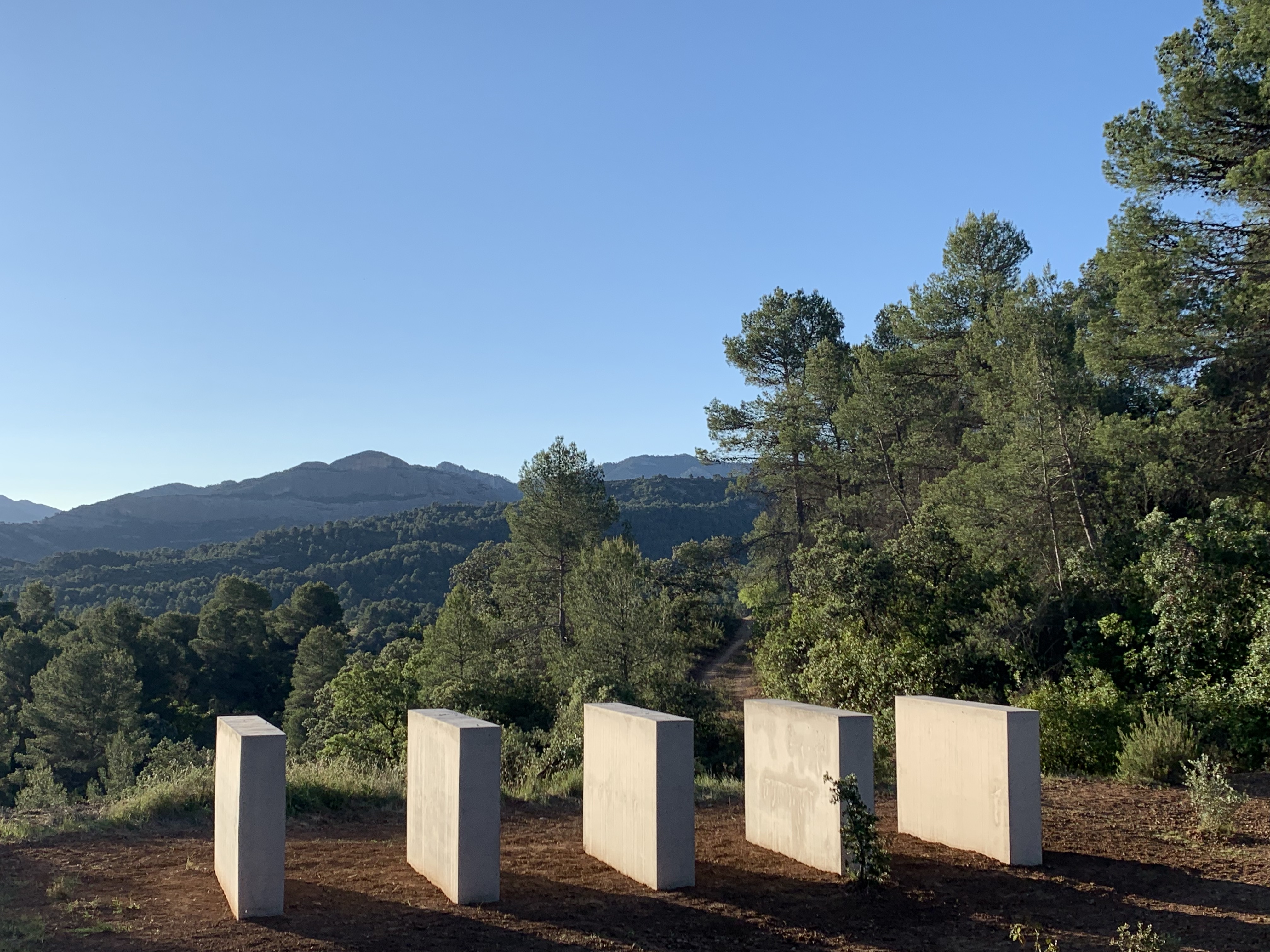 Five hundred Japanese bells are placed according to the configuration of the stars the night Boltanski was born. When the wind blows, the bells tinkle suspended from thin metal rods producing a delicate chime, while the plates fixed in each one reflect the light. Animitas was established in 2014 in the Atacama Desert of Chile and since then it has been replicated in other contexts, including a snowy landscape of Canada, a forest in Japan or the Dead Sea of Israel. 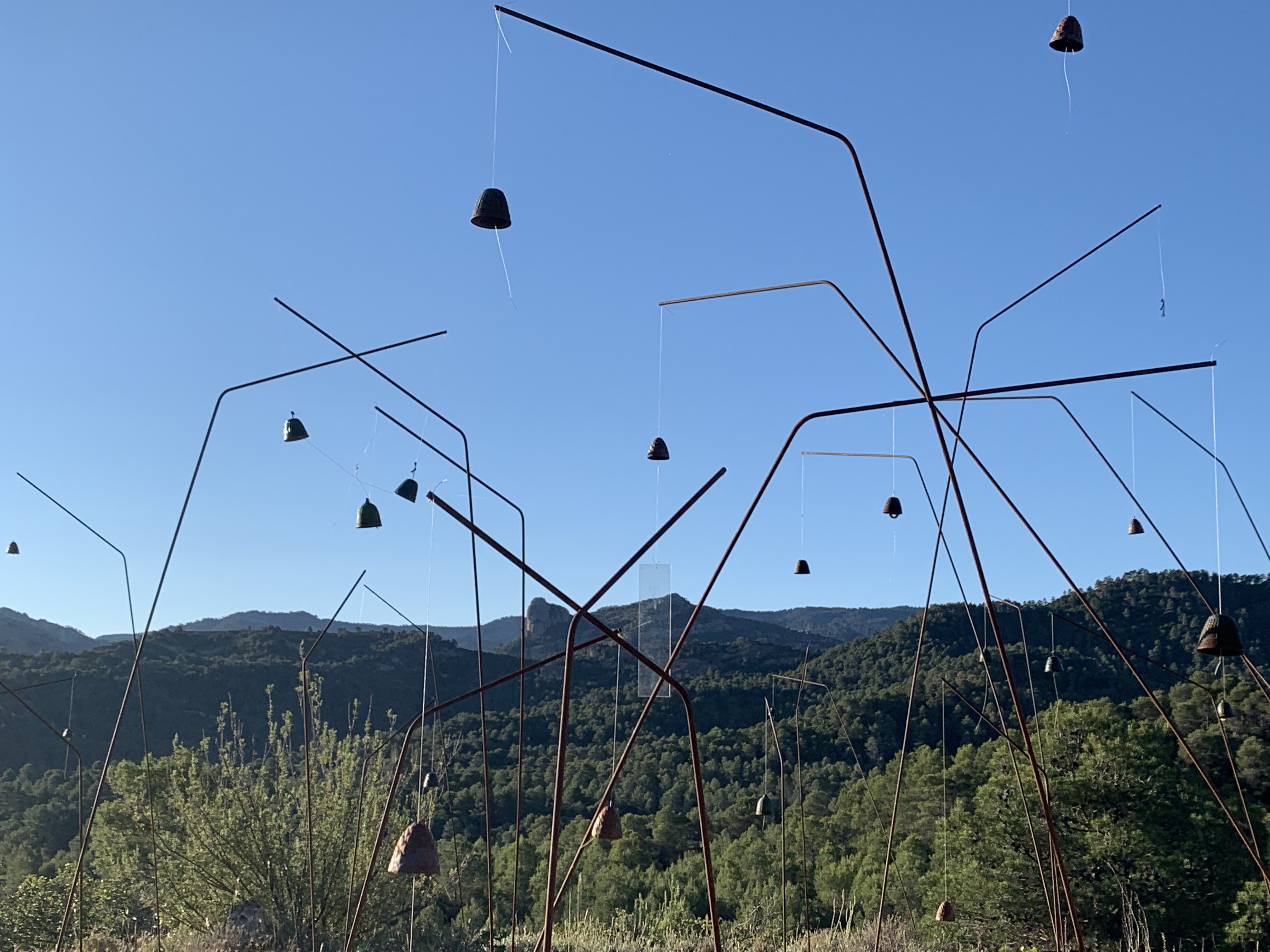 The work offers a reflection on the importance of the position taken: that of sculpture within its context, that of the viewer vis-à-vis the work, that of the artist within the world that surrounds him. Within these complex structures the position of each element plays a decisive role, and this works for language as well as architecture. The lines and the words used to mark or underline the architecture, the passage thus offer an opening onto the environment, an opening towards interpretation. Spectators are invited to shift their gaze in a different way to interpret the place, the context and the work in a different way. The viewer turns into a participant. 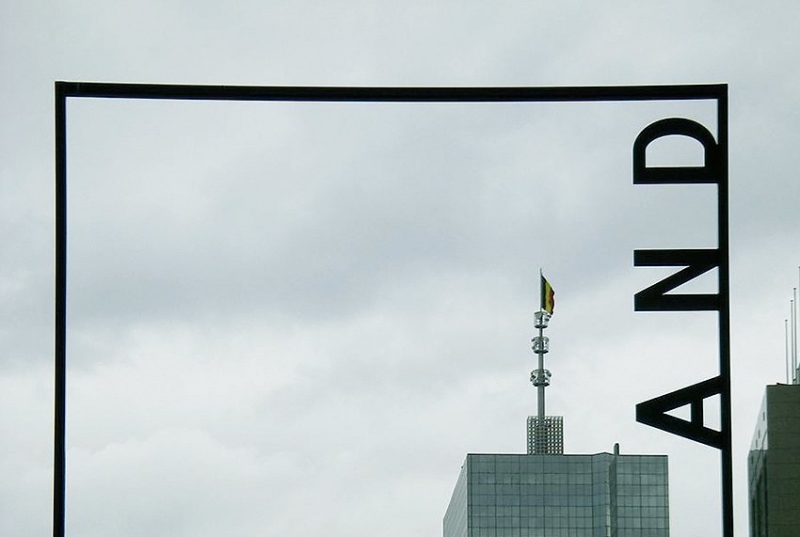 Melting Bodies, 2019, is the phrase that can be read on the billboard that makes up the work. Unlike conventional fences, the text is perforated on the metal that serves as support for the fence and allows a view into the landscape around. The work reflects the possibility of combining commitment and sensitivity in the same structure, giving a message in which the support is complimented with meaning.

The artist has created a monument to the barricades erected in Spanish cities during recent demonstrations with the most valuable of all the sculptural materials: bronze, which has always been used for the construction of memorials. His Barricada Collage. La naturaleza de lo social (2014) is irritating because it consists of «natural» impressions of everyday objects reconverted for street fighting, raising the set of branches, tires and bottles to monument of insurrection and resistance. Many times the historical monuments in the public space are the most evident, as Robert Musil wrote: «The most striking thing about monuments is precisely that one does not realize them.» There is nothing so invisible as a monument. 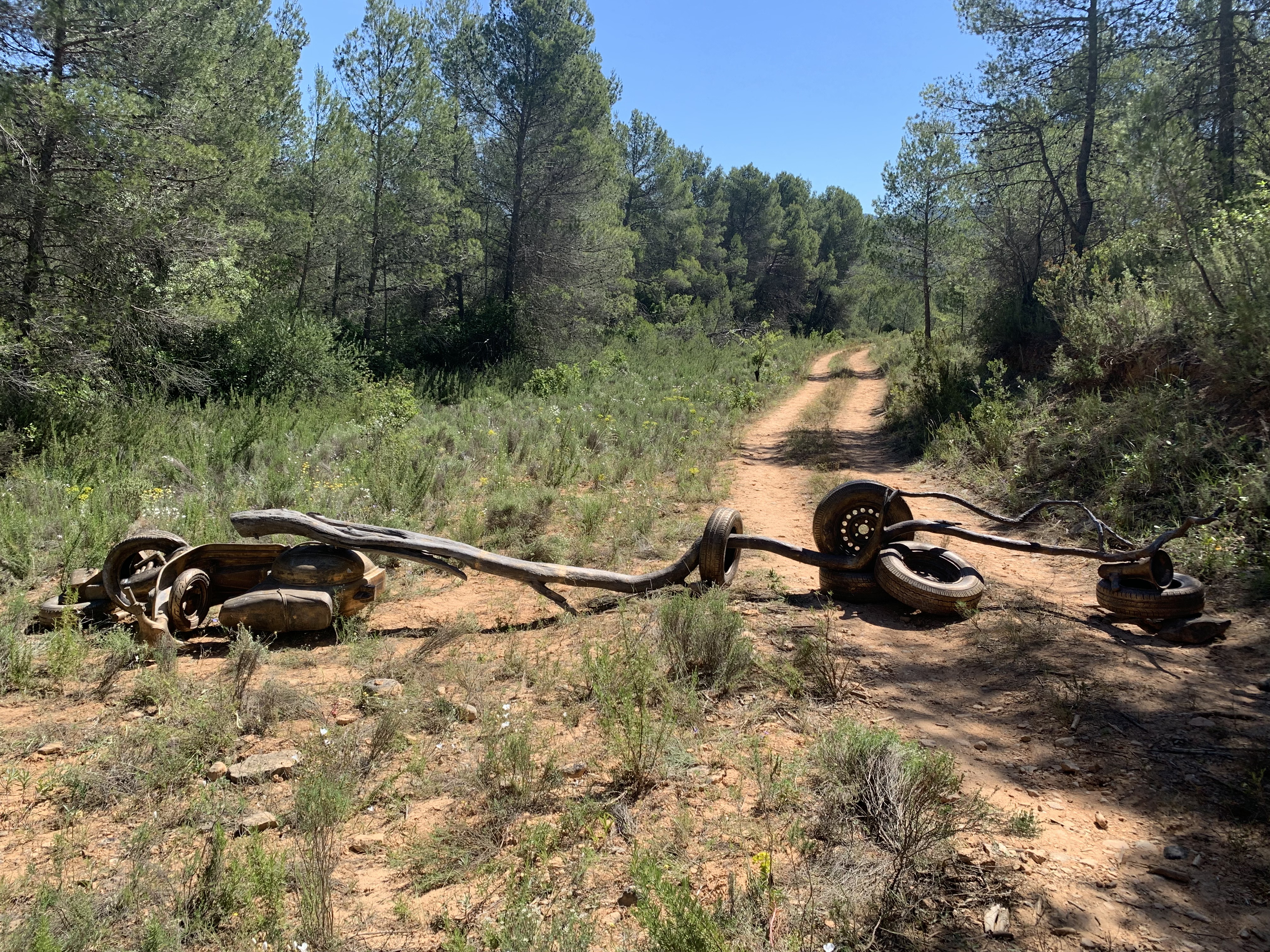 The work of the last years of the architects Fabrizio Barozzi and Alberto Veiga has revolved around the attempt to dignify the public space as a place of the community, defining a specific architecture for its environment. By giving importance to the sentimental bond that is established between architecture and its surroundings, they seek to identify an architecture that aspires to grant dignity, identity and a sense of belonging to the places of civil life. For Barozzi and Veiga, this work is an example of specific and autonomous architecture at the same time, capable of preserving the richness and uniqueness of each place while still discovering the unexpected landscapes that is hiding. 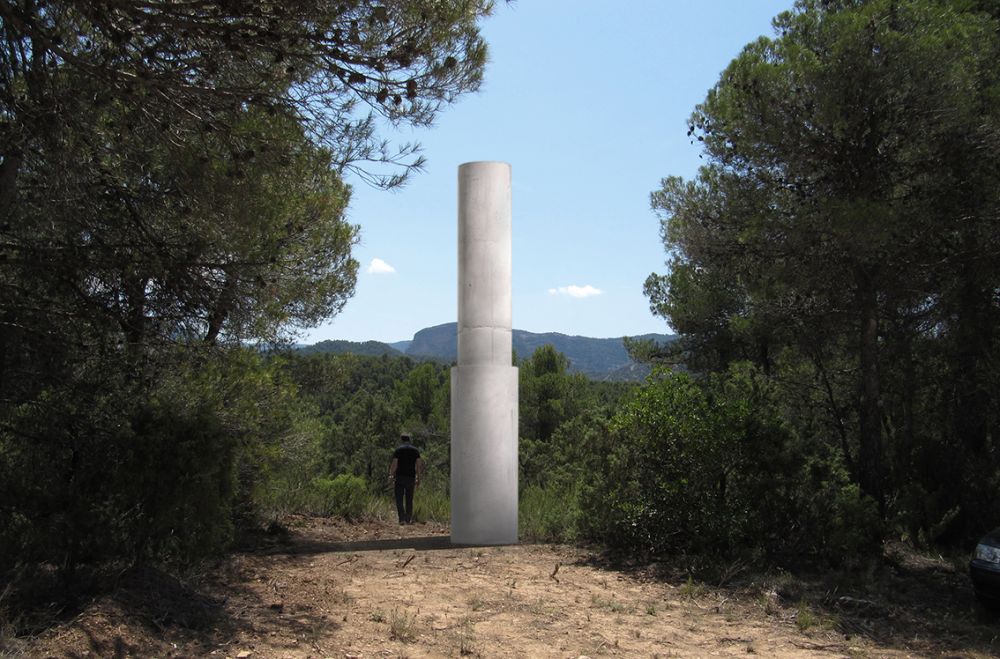 Héctor Zamora will create a labyrinthic structure referencing the drawing of a labyrinth discovered in a stone found in Knidos, Turkey. This type of labyrinths provides a circular route that leads to the center, and returns, without presenting alternative options or shortcuts – labyrinths that oppose those from the West, which create a network of options for the walker. The perforated brick walls obstruct the view partially, offering «a new perception between the hidden and the open». This visual permeability aims to recover the semi-translucent and semi-open walls of the labyrinth, and establishes a contrast with the classic concept of «labyrinth», in which the wall makes vision impossible and obliges walkers to cross it in search of its center.

«Once we imagined a room without walls and without a roof, barely confined by three slender columns. The room would be generous to the point of losing two of the columns against the horizon. Soon we corrected our modesty; the room would have to fall back against the only known corner of its triangular plan, doing its best to take care of that simple 3: 4: 5 relationship between its sides. Ten years later, and by chance, we drew again what we remembered about this naive idea. Naturally, time knocked down two of the columns. Now the third column, which no longer had direction, would disguise the entire enclosure and its surroundings. This vague and lonely column, with some penitentiary fort and some decorative obelisk, not only serves to enclose each landscape that you touch but also to cancel any remote possibility of leaving it.» 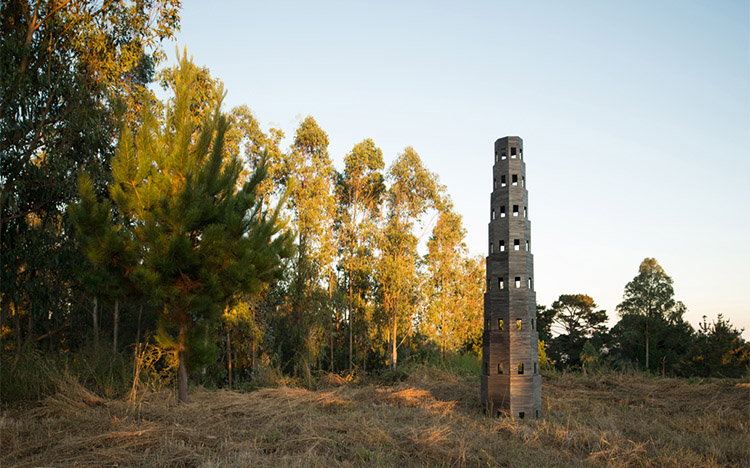 A DAY OF ARCHITECTURE, DESIGN AND ART WITH… CARLA CASCALES

ABOUT WATER BY ULF SAUPE, with the special collaboration of ECOALF