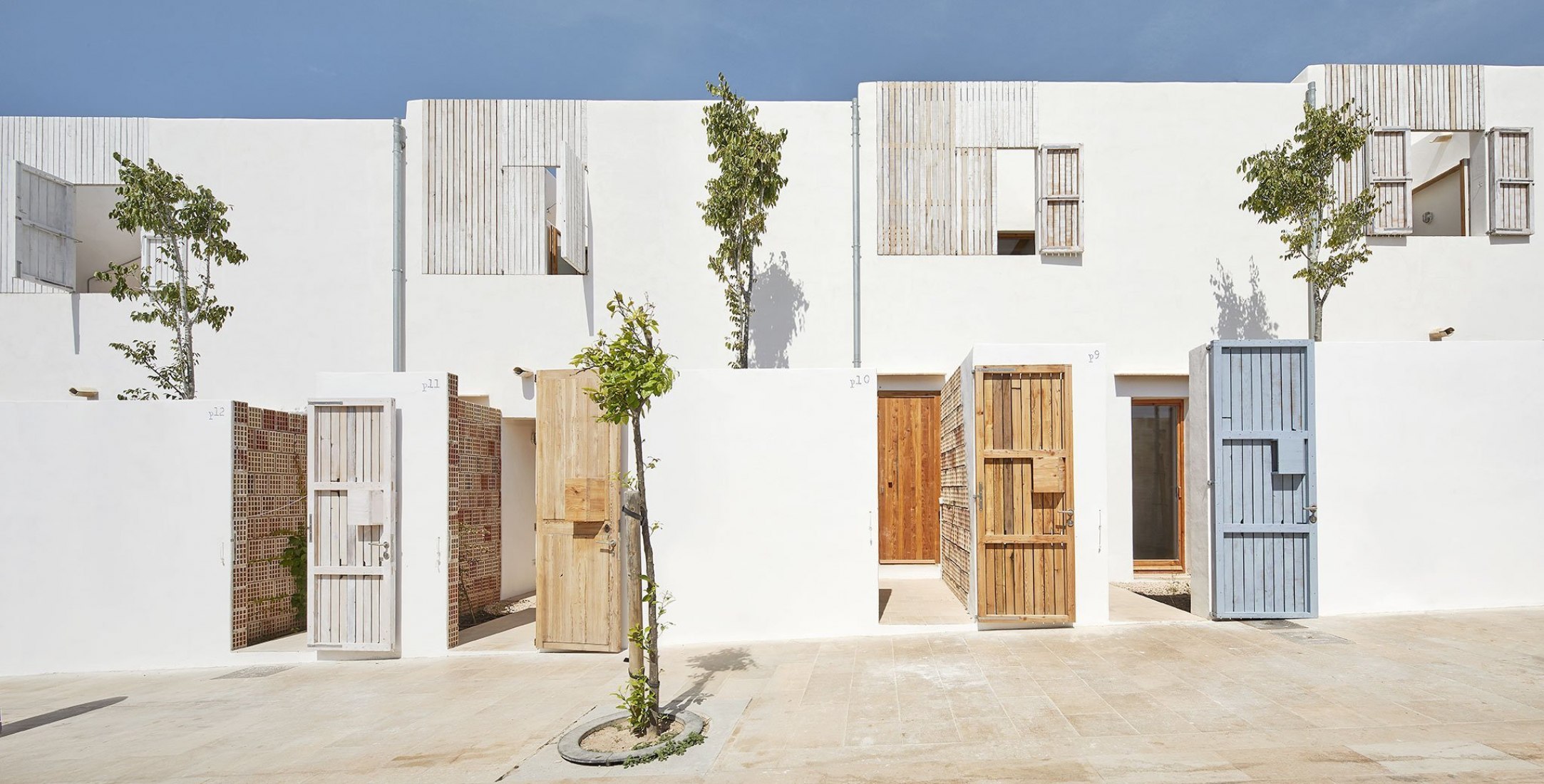 Today we want to tell you about this project that has fascinated us and that shows that another way of building is possible. Sustainability and design with a social purpose.

The Life Reusing Posidònia project built 14 official protection houses in Formentera, recovering traditional and sustainable construction techniques, such as the use of posidonia, an autochthonous marine plant, as insulation material.

They take advantage of the resources of the environment using both local materials and the incorporation of local artisans.

All these attributes have earned him numerous recognitions such as winning the prestigious FAD 2018 award and having been one of those selected for the Mies Van de Rohe 2019. 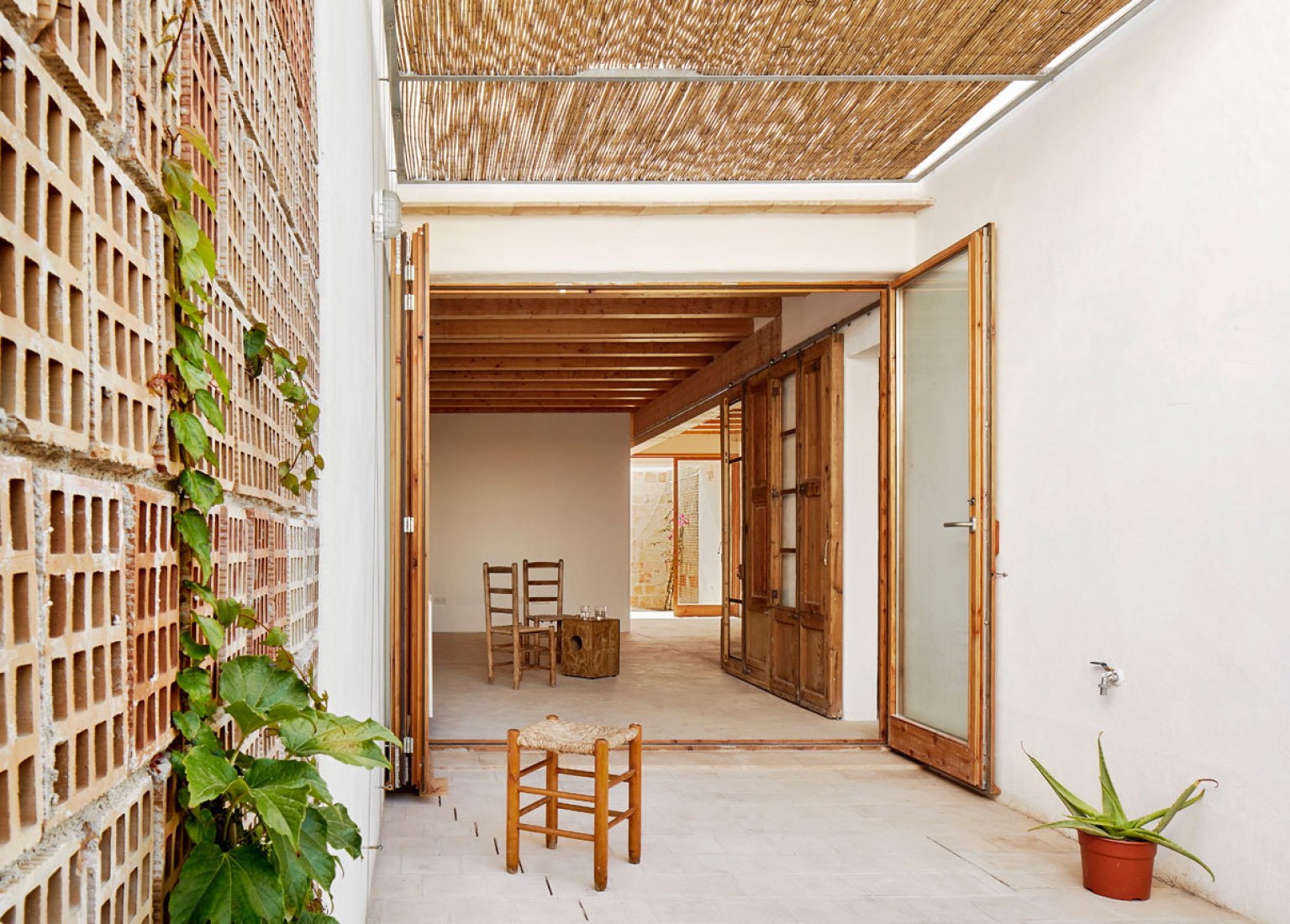 This architecture designs with special care every space, always thinking about the life of its occupants.

The buildings pollute and more in the Balearic Islands, especially for the transports. So your objectives with this project are:

The main innovative aspect is the reduction of 50% of the CO emisiones emissions during the execution of the works, for which an adequate selection of materials is proposed, in which biospheric ones prevail, recovering own techniques of the vernacular architecture, according to the Next hierarchy: 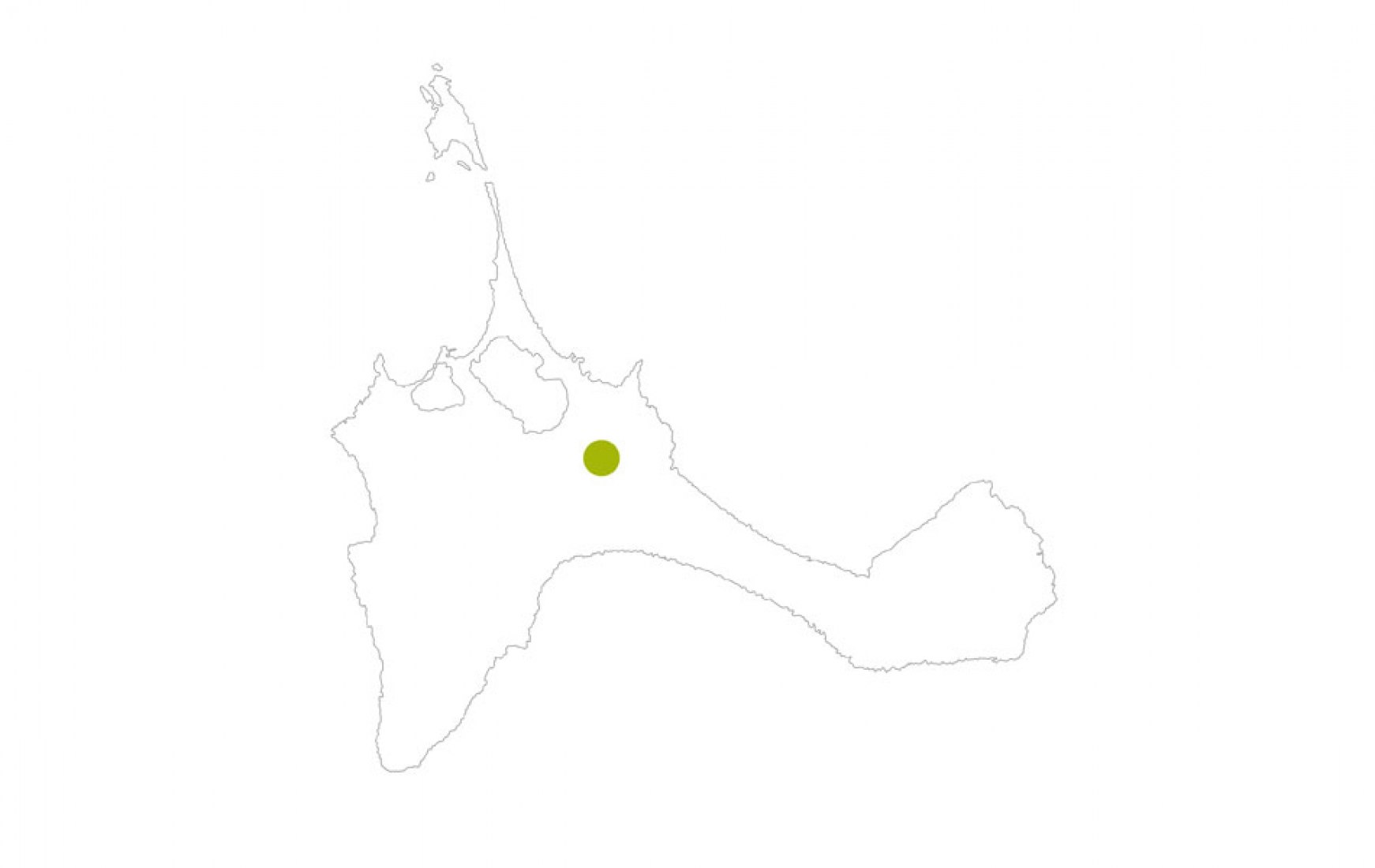 Traditional architecture has been a constant reference, not as a form, but as a way of working, scarce resources and the use of whatever is at hand. The junipers, with which the slabs were formerly built, are fortunately protected. The quarries of sandstone, exhausted, and the little straw that is produced, is used for cattle. Therefore, they only had what arrives by sea: posidonia and boats. In addition to the palés de obra, which remain on the island because of shipping them back.

So they propose a change of concept:

“Instead of investing in a chemical industry located at 1,500kms, we will dedicate the same budget to a low-skilled local labor force, which must extend the posidonia to the sun to dry it, and compact on the pallets, getting 15cm of insulation on the roof. In addition, it turns out that sea salt will act as a natural biocide, and the product will be completely ecological.” 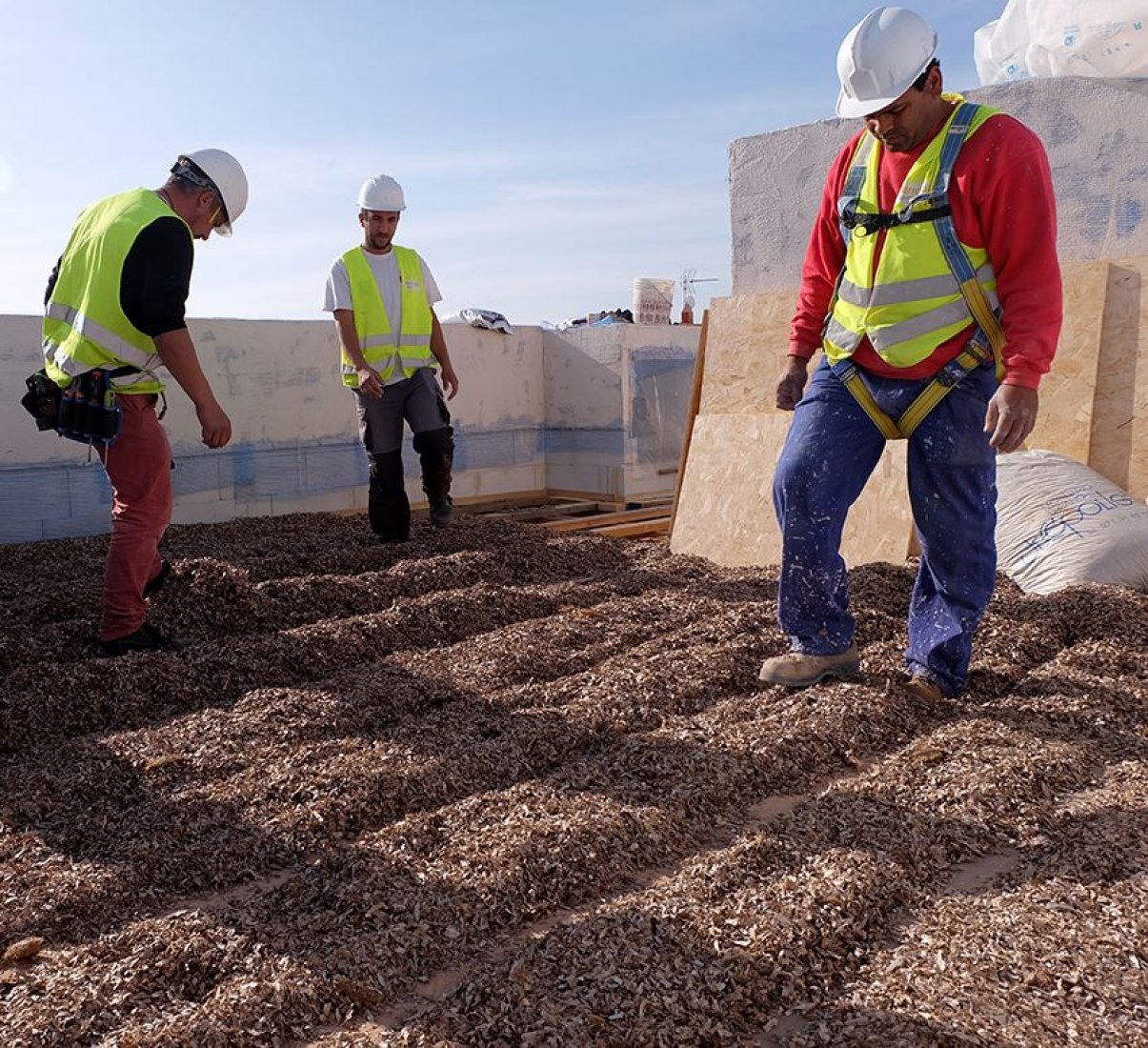 They only resorted to other islands such as Mallorca, when a material impossible to find in Formentera was needed, always trying to get as close as possible.

We especially emphasize the reuse of materials such as wood, which through the Fundación Deixalles (manage objects that nobody wants, promoting the employment of people at risk of social exclusion), through which they recover old doors and woods that are later restored and adapted for this project.

The bricks used have been made by an artisan process (clay created as anciently, earth, water and fire), baked in a traditional oven as before (metal box lined inside by adobe manufactured by artisans), and as materials for combustion use of biomass (does not produce sulfur), based on almond shells , vegetable biomass, remains of pine needles and pine chips.

For the «marès stone» they resort to the quarries of Mallorca

The tiles have been glazed by hand by Felanitx artisans and the lime, now almost in disuse, is also brought from there, which is also cooked with recycled oils.

Under the motto «think global, act local», they propose a model of hyper local architecture, in which each project accrues a map of the territory’s resources. This approach allows us to relate the environmental issue to the cultural tradition of each region, achieving not only the prevention of global warming and an improvement in air quality, as well as a recovery in the landscape quality of cities. 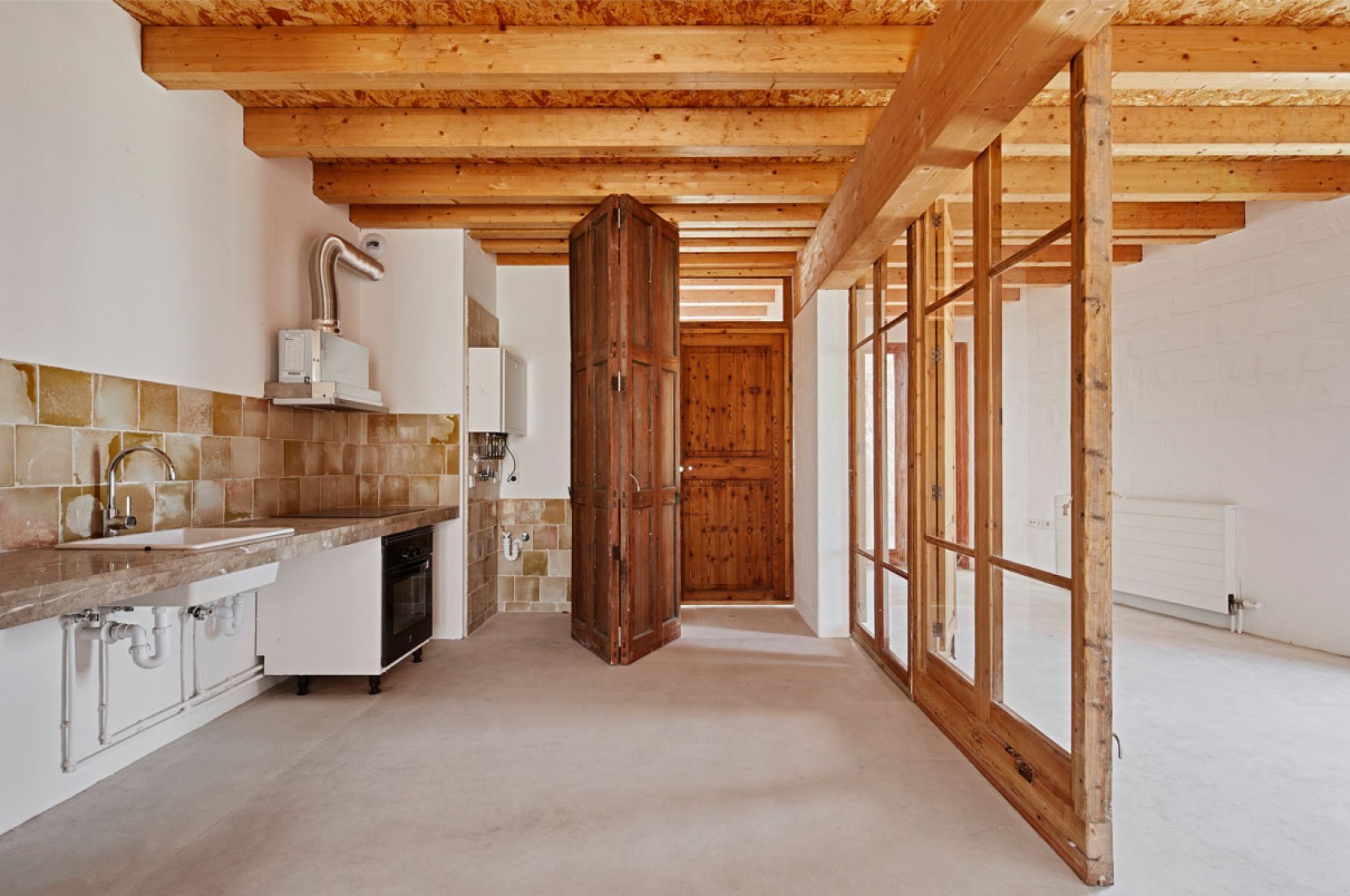 Some other bioclimatic measures used are a design of natural ventilation by suction, protection of stained glass windows with porches and pergolas with vines and a bamboo hurdle, shutters, interior wooden shutters, white fishing nets in the facade to facilitate the growth of the plants climbers, reducing solar radiation with them. The passive climate control is supported by a biomass boiler and for the management of the water tanks have been arranged to collect rainwater and thus be able to irrigate all plants planted with bioclimatic function (11 trees and 40 climbing plants). In the central patio, a phyto-sewage treatment plant has been installed, which cleans the water coming from the showers, to be used in the toilets.

This promotion was selected as a Pilot Project in which to check and determine the real unit cost of a promotion of multi-family housing that meets the requirements proposed by the Guide for Environmental Measures for Building in the Balearic Islands, developed by the IBAVI itself in collaboration with Societat Orgànica Consultoria Ambiental SL. The extended application of this model would allow the opening of new additional ways to reach the Europe 2020 Strategy. Follow-up in collaboration with the University of the Balearic Islands.

An architecture with a sense that thinks about the future.

The importance of the Oceanic Posidonia

Regarding Posidonia, it is a marine plant and not an algae, which has a root, stem, leaves, fruits and flowers. Form prairies between the surface and 40 meters deep in waters of great quality as those of Formentera. It is an endemic species of the Mediterranean and, since 1999, specifically, the meadow of the Natural Park of the Salinas de Ibiza and Formentera was declared a World Heritage Site. The Posidonia represents one of the most important natural values ​​of the island, since it exerts an important function in the filtration of the sediments, thus giving a unique transparency. It also helps to maintain the quality and oxygenation of the underwater ecosystem where more than 400 species of marine plants and 1,000 species of marine animals feed and reproduce, many of them used in Balearic gastronomy. Finally, the posidonia barriers in the sand prevent the erosion of the beaches.

The spread of the Posidonia

The Posidonia creates extensive meadows that cover the seabed and constitute an ecosystem of great beauty, which enables the development of recreational activities such as diving and snorkeling. Therefore, it can be said that the contribution of this species, both to the maintenance of environmental quality and water, and its contribution to the economy of the Balearic archipelago, is vital. The Balearic Islands have an area of ​​55,795 hectares of Posidonia meadow, of which 7,650 hectares correspond to the waters of Formentera. This translates into 76.5 million square meters to protect only in Formentera. 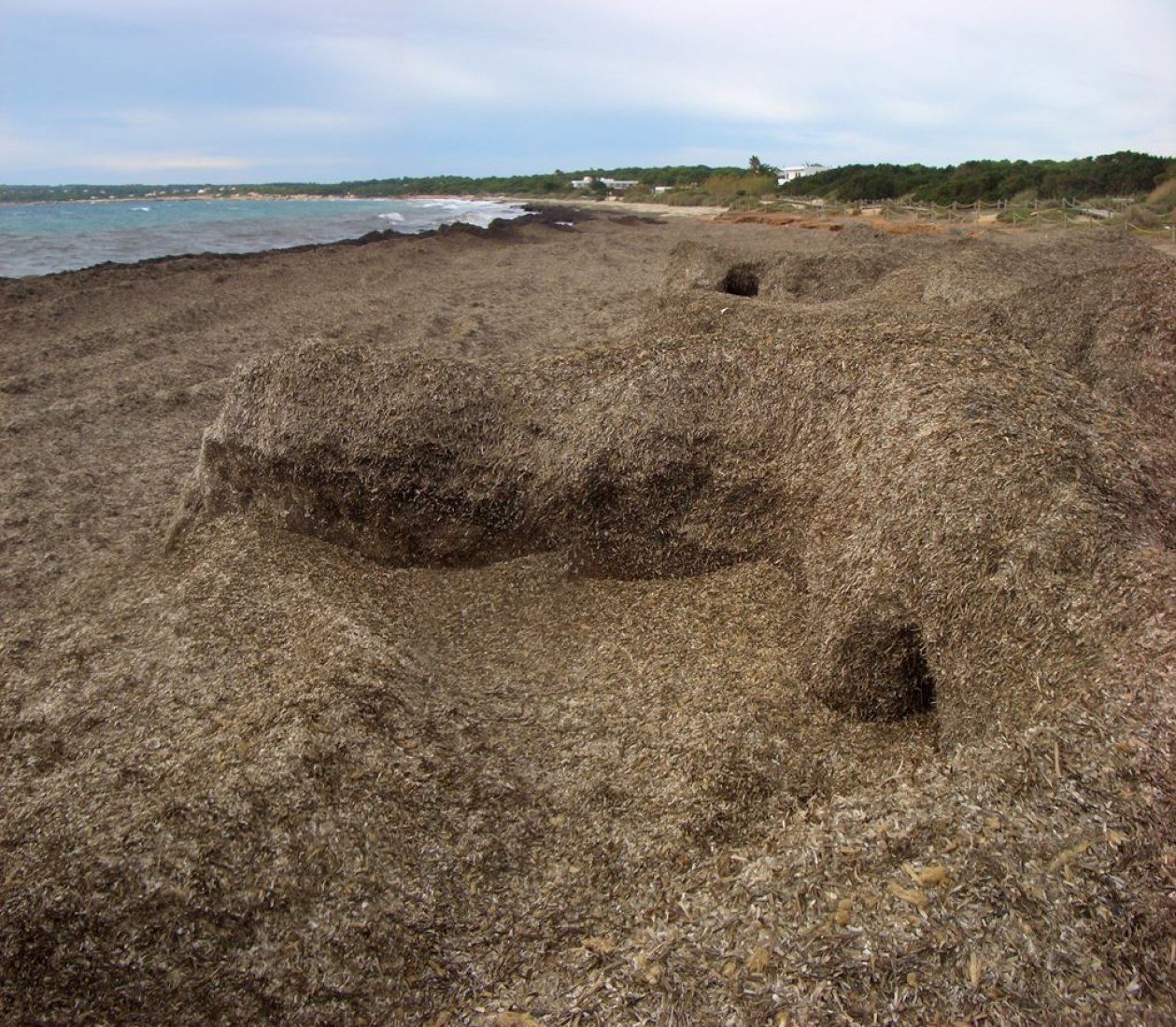 Protective measures of the Posidonia in Formentera: 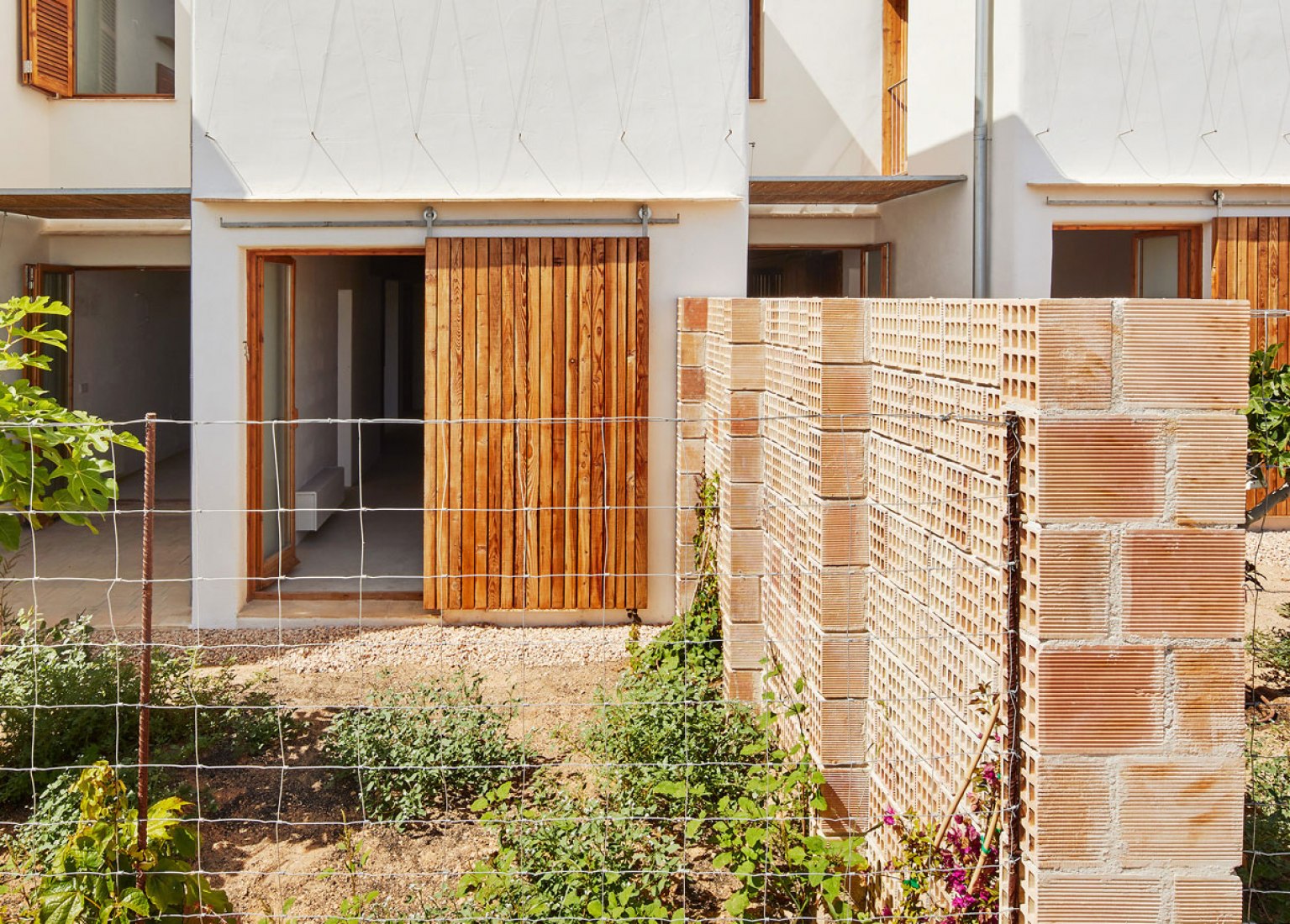 The project received a grant of 754,012 euros from the European LIFE + 12 program in the category of Environmental Governance for projects against climate change.

All homes are rented, and have two bedrooms with living room, kitchen and dining room with double orientation .

«From Drawing to Reality», an exhibition by CLK architects

OPEN HOUSE MADRID ARCHITECTURE FESTIVAL, from 27 to 28 of September 2019